Considerations of the Origin of the Dalmatian Breed

Re Published with Permission

There are many theories surrounding the origin of the Dalmatian, which is the only such uniquely and distinctly spotted breed within the vast array of canine species.

The most common idea (and indeed the one the FCI has adopted) is that the Dalmatian originated in Dalmatia (a region in Croatia), hence the name.

Extensive research by Dr. John H. and Monica Brooks (co-authors of ‘Dalmatians In Canada’), Patches Silverstone (author of ‘Dalmatians Today’), Dr. David Hancock (author of ‘The Heritage of the Dog’), and others, failed to find any evidence of Dalmatians in Croatia, which has thus been discounted as the country of origin of the Dalmatian breed.  The Brooks thoroughly researched the Dalmatian/Croatia question, and provide compelling evidence in their book [1], which I quote.

“Frankling quotes interesting correspondence in the Sunday Times.  “My stepfather … introduced Dalmatian dogs from England in 1930.  There was no trace of Dalmatians in Dalmatia before them … (Mr. Vane Ivanovic, May 1953).”

“My parents and I spent a few weeks touring the coast of Jugoslvia … and (I knew) in all probability this country is not their land of origin.  I asked for Dalmatians everywhere, showing photos.  But no native had ever seen such a dog … (in Dubrovnik) I succeeded in finding people who knew a Dalmatian … (the Dalmatian) was said to be the last descended of a stock of six or seven Dalmatians imported from England about 1930-31.” (Frau Brosius, 1954). ”

The Brooks also corresponded with Mr. Lovet F. Edwards, author of ‘The Yugoslav Coast’ (and an expert on Dalmatia past and present).  He said “I have known Dalmatia for more than 50 years, not only the coastline of the tourists, but also the mountainous hinterland, but have never seen a Dalmatian dog there.”

The idea of Dalmatians originating in Croatia has nevertheless persisted.  In support of this idea, in their 2008 article ‘The origin and evolution of Dalmatian and relation with other Croatian native breeds’, authors Bauer and Lemo assert that their native Istrian Hound and a now extinct Old Croatian Sighthound are closely related to Dalmatians by virtue of having the HUU gene present, plus their similar genetic coat color formulas.  On the subject of the HUU gene they say “if it is found in any other dog, it can be considered that this dog is closely related to Dalmatian. Besides this metabolic closeness, there is relation in color of the coat between Croatian native breeds of dogs.  It is observed explicit similarity in genetic coat formulas. Typical spotted of Dalmatian dogs not being observed at other breeds, very often is manifested at Istrian hound of dog.” [2]

This puts an entirely different spin on the relationship of the Istrian Hound and the Dalmatian, since the other breeds mentioned above are definitely not considered closely related to the Dalmatian.  Rather than the mutation appearing independently in each breed, it seems much more likely this mutation arose before these various breeds were split off from the common ancestral canine stock, and thus its presence cannot be used to determine close relationship between breeds.  It is instead a much older and more widespread mutation than was previously believed.

A theory of how the HUU gene became homozygous in the Dalmatian breed is that the SLC2A9 mutation inadvertently became homozygous throughout the entire breed simply because the gene controlling lack of interspersed white hairs in ticked areas is physically present on the chromosome very near the location of the SLC2A9 mutation gene (i.e. they are closely linked,) and thus the two characteristics (HUU and clear spotting) were inherited together.  Therefore, it was proposed that the HUU gene could have been inadvertently set in the breed by selecting for clear Dalmatian markings (i.e. bold round spots free from interspersed white hairs rather than patches or flecks).

Worldwide searches for normal uric acid metabolism genes in the Dalmatian failed to find any copies of the normal UA allele in the breed, so this visual selection, if correct, was apparently extremely effective.  However, Schaible[4] found from his Dalmatian/Pointer crosses that “The production of 5 puppies having normal metabolism of uric acid and absence of interspersed white hairs in the Dalmatian-type spots in the backcrossing experiments, demonstrated that the gene for the defect in uric acid metabolism was not required to achieve the spotting pattern described in the standard.”  Thus, it seems unlikely that selection on the basis of clear markings alone could have removed all copies of the normal UA gene from the Dalmatian breed worldwide, since it has been shown these characteristics can be inherited independently, producing dogs with both clear Dalmatian markings and the normal UA genes.

Instead, it is possible that any remaining normal alleles within the breed population were lost due to bottlenecks created by events such as the World wars, which left a much reduced breed population, and that the remaining individuals just happened to be homozygous for the HUU mutation. Another theory would be that the breed as we know it today arose from a very few initial individuals, which happened to be homozygous HUU (the founder effect).

With regard to the ‘explicit similarity in genetic coat formulas’, the Istrian Hound has the extreme white piebald swsw coat pattern with lemon or orange colored markings, and while it may have speckles of pigment on the skin of the body, these do not come through as pigment into the hair coat.  The mention of ‘spots’ in the Istrian Hound breed actually refer to patches of various sizes.  Many breeds have this type of skin mottling and are not considered closely related to the Dalmatian.  Both breeds have alleles B and b at the B locus, but Istrian Hounds are homozygous recessive ee at the E locus since they are all ‘orange’. The vast majority of the Dalmatian breed is homozygous EE, although the e allele also exists.  Because the body speckles on Istrian Hounds do not come through into the coat, the breed is likely tt at the T locus, whereas Dalmatians are TT.

This raises another question about the unique type of spotting found only in the Dalmatian.  If other breeds have the dominant ticking allele T, plus the swsw extreme white piebald gene and the HUU mutation present, why does no other breed have Dalmatian-type spotting?  A third gene influencing coat spot clarity has been theorized, called the flecking gene, with the Dalmatian being homozygous recessive ff (for non-flecked).  “F (Flecking) Locus: The alleles at the theoretical F locus are thought to determine whether an animal displays small, isolated regions of white in otherwise pigmented regions (not apparent on white animals). Two alleles are theorised to occur at the F locus: * F = Flecked * f = Not flecked  It is thought that F is dominant to f.” [5]

In body type and behavior, the Istrian Hound is definitely a hound (including being very vocal on the hunt: “The Istrian Shorthaired Hound, or Istrian Pointer, is the older and more common variety, known for their persistent and sharp baying while hunting.”), quite unlike the Dalmatian, who coaches silently.  Considering the forgoing ideas, it seems unlikely the Istrian Hound and the Dalmatian are particularly closely related breeds.

While references are made to Dalmatian-like dogs in very early etchings, paintings, murals, and friezes, these particular individual art items are also often claimed to be proof of the origin of other speckled breeds.  The purported Dalmatians running with chariots were actually lions, which over the years became the victim of artistic license and appeared more doglike and eventually as spotted dogs.

The earliest depictions of convincing looking Dalmatian type dogs are from the mid 1600’s to early 1700’s, and one of the oldest with truly Dalmatian-looking dogs is reproduced on the cover of ‘Dalmatians In Canada’.  It is a detail of the painting ‘Hounds With Their Attendants’ by Francisco Castiglione (1650-1716), by courtesy of the Dresden Gallery, West Germany 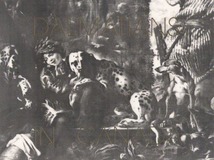 Hancock[6] mentions three types of Cretan hounds from Ancient Greece: “Cnosians – famed for their noses, the Workers – so keen they hunted by night and day, and the Outrunners, who ran free under the huntsman’s voice control only, and, according to Aristotle, ran along instinctively beside the horses.”  His conclusion is that “the Dalmatian is more likely to have been a Western European fallow-deerhound, a descendent of the ‘de mota’ dog or ‘deymerettors’ of over a thousand years ago in the mould of the Cretan ‘outrunners’.”

Interestingly, the earliest written record of a dog being called ‘pointer’ comes from a leather-bound hand written book ‘The Generous Sportsman, or, a Brief Discourse of Setting Doggs’ by ‘A Lover of the Setting Sport’, ca. 1725[7], which says “Should there omitt mentioning another kind of Doggs much in Vogue with some by the term of Naturall Pointer, by some called Spanish Trotter.  I might be justly blameable which firsts term seems to appoint him out for the most kindly dogg in the world for a Setter, for what can seam more proper then.”  One has to wonder if these might have been of the ‘outrunner’ type.

By the late 1700s to early 1800’s more artwork showing Dalmatians actually coaching appear, such as the etching below from Bewick (1791)[8], and it is during this time period that the Dalmatian breed underwent great development in the UK.

The earliest registered Dalmatians in the UK date from the 1870’s, and etchings of these early dogs show they were very typical representatives that could easily step into the show rings of today with success.  Below are Eng.CH. Berolina, born 1887 (standing and on the move) and the liver Eng.CH. Fauntleroy, 1899. 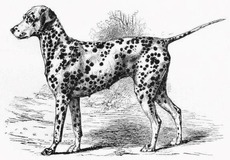 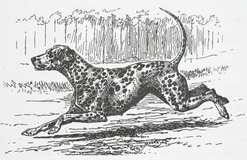 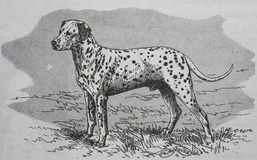 As far as the name goes, a plausible explanation was proposed by Hancock, referring to 13th century running hounds, as reported by Silverstone [9].  “More likely, the name is a corruption of “Damachien” as they were then known (Dama being Latin for Fallow Deer and Chien French for hound or dog).”  This idea is somewhat corroborated in the painting “The Hunt of the Duchess of Lorraine”, by French artist Claude Deruet (1588-1662), likely depicting a hunt at their villa in Italy.  “The history of 'La Ferdinanda' Villa began in 1596 when the famous architect Bernardo Buontalenti was commissioned to build it by Ferdinando I de' Medici, Grand Duke of Tuscany. Originally constructed as a hunting residence, the villa was completed very quickly and the court of the Grand Duke with the Duchess, Christina of Lorraine, moved to this delightful estate.” [10]

Spotted Dalmatian-type hounds are clearly depicted hunting rabbits and deer as shown in these details from the above painting. [1]

Another early painting by Fyt[11], thought to be from the 1640’s, also shows a very Dalmatian-like hunting dog. 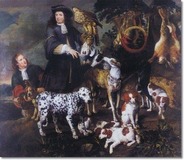 No matter what the original origin(s) of the stock which gave rise to the Dalmatian, an undisputed fact remains. The Dalmatian as we know it today was developed and nurtured in the United Kingdom, and virtually all, if not all, current Dalmatians worldwide can trace their pedigrees back to British stock imported into the various countries around the globe.  This includes Croatia, where as previously mentioned, the first recorded Dalmatians were imported from the UK in the 1930’s, as well as the US where George Washington imported a male Dalmatian from England in August 1787[12].  Thus, Dalmatians from the UK form the basis of the breed throughout the world today.

Advances in medical research technology in recent years have produced a flurry of activity in gene mapping and the investigation into genes responsible for producing various traits.[13] Future DNA mapping and screening will add to the ongoing research providing more tangible proof of relationships between various dog breeds and hopefully a better understanding of the Dalmatian’s origins and close relatives.  Suffice it to say that the Dalmatian has remained a unique and largely unchanged breed for at least the past 200 years and probably much longer.  The precise origin of the breed, the exact mechanism producing its unique spotting, and how the HUU gene became homozygous remain mysteries yet to be solved.